$281.00
In stock
SKU
034-509-5024-SD
Add to Wish List
We're proud to announce the availability of the Street Density Engine Mount Pair for MkV/MkVI Volkswagen Golf/Jetta & 8P Audi A3 2.0 TDI models! 034Motorsport's Density Line Mounts are the new standard in comfort and performance. Our mounts are redesigned with performance in mind, and manufactured from high-durometer rubber for increased performance and durability, without sacrificing comfort. Density Line Mounts are optimized void-free and fluid-free, eliminating the slop associated with the factory mounts.
Related Products
Check items to add to the cart or
Skip to the end of the images gallery
Skip to the beginning of the images gallery
Item Details

The result is greatly reduced drivetrain slop, crisper shifting, and minimal wheel hop, without any significant increase in noise, vibration, or harshness (NVH) inside of the cabin. These mounts are a completely re-engineered performance solution, not just inserts for use with the factory mounts. 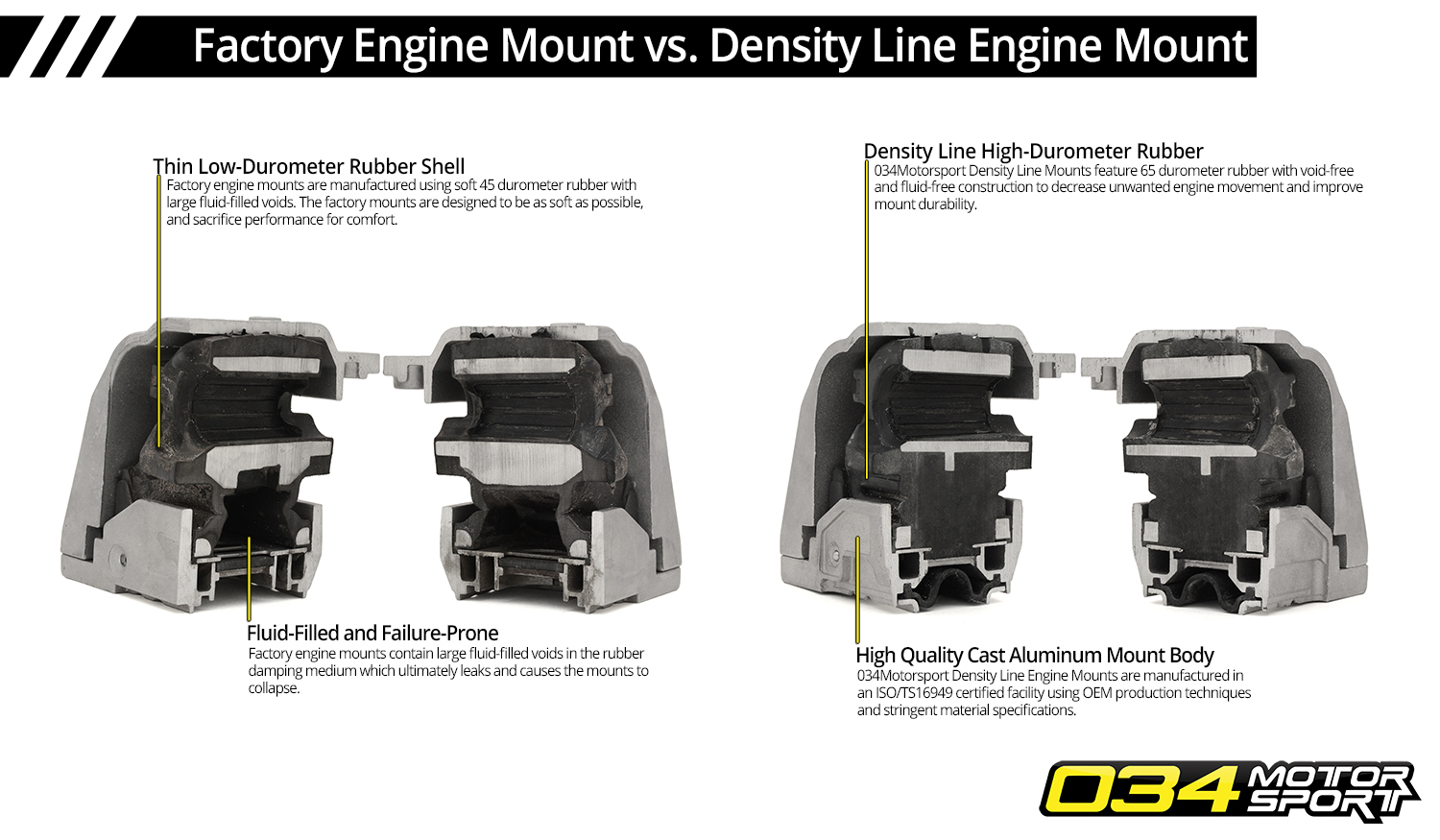 Density Line Mounts are manufactured from high-durometer rubber instead of polyurethane for a number of reasons. While vulcanized rubber mounts are more expensive to prototype due to increased complexity of manufacturing and high initial tooling costs, rubber is inherently better than polyurethane as a damping medium for mounts and bushings.

Rubber is able to deal with stress under both tension and compression, while polyurethane mounts rely on the damping medium to be effective only under compression. Rubber is also excellent in shear, where polyurethane is ineffective, making it ideal for control arm bushings that apply a shear force to the bushing during articulation.

Rubber does not pack and wear like polyurethane does, which ultimately results in a long-lasting part with consistent performance and comfort.

These mounts are currently available in Street Density only.

NOTE: This Street Density Mount application features stiffer and less compliant rubber, however, the mount is not designed to see significantly larger amounts of abuse, as Density Mounts use a similar design and construction to the OEM mounts. This means that driving dynamics are improved, but these mounts are not necessarily suited for more punishing applications or abuse. Normal "sport driving" will typically see these mounts lasting up to 50k miles or more. More abusive use, such as aggressive drag racing, clutch dumps, aggressive shifting, and big increases in power, can cause these mounts to fail or wear prematurely, typically in 20k miles or less. For mounts that will sustain the latter abusive scenarios, we strongly recommend our Motorsport Mounts which are designed for specifically for such use.

Warning: This product may contain a chemical known to the State of California to cause cancer, birth defects, or other reproductive harm.