034Motorsport's 2011 Audi S4 is a testament to the performance levels that the current generation S4 can achieve through effective hardware modifications and expert tuning. Acting as 034Motorsport's main Performance Hardware & Software Development Vehicle for the B8/B8.5 Audi Chassis, 3.0 TFSI Engine, and DL501 S-Tronic Transmission, this Brilliant Black example splits its time between the street, dyno, and track to ensure comprehensive testing and data collection under a multitude of driving conditions.As with most newer Audi S-Line vehicles, 034Motorsport's engineers took an OEM+ approach to modifying the B8 Audi S4, with a goal of enhancing power delivery, handling, and driving pleasure without detracting from everyday comfort and reliability. Over the years, this focus on designing functional improvements has yielded a complete catalog of B8 Audi S4 Performance Upgrades, each of which complement the S4's engaging, sophisticated feel with noticeable improvements in power, handling, and precision.

Boasting peak numbers of 333 horsepower and 325 foot pounds of torque from the factory, the S4's 3.0 TFSI Supercharged V6 engine makes a phenomenal starting point for modifications. With just a few high-quality hardware upgrades and programming changes to the Simos 8.4 Engine Control Unit (ECU), the 3.0 TFSI engine is capable of safely and consistently delivering substantially more horsepower and torque throughout the powerband. 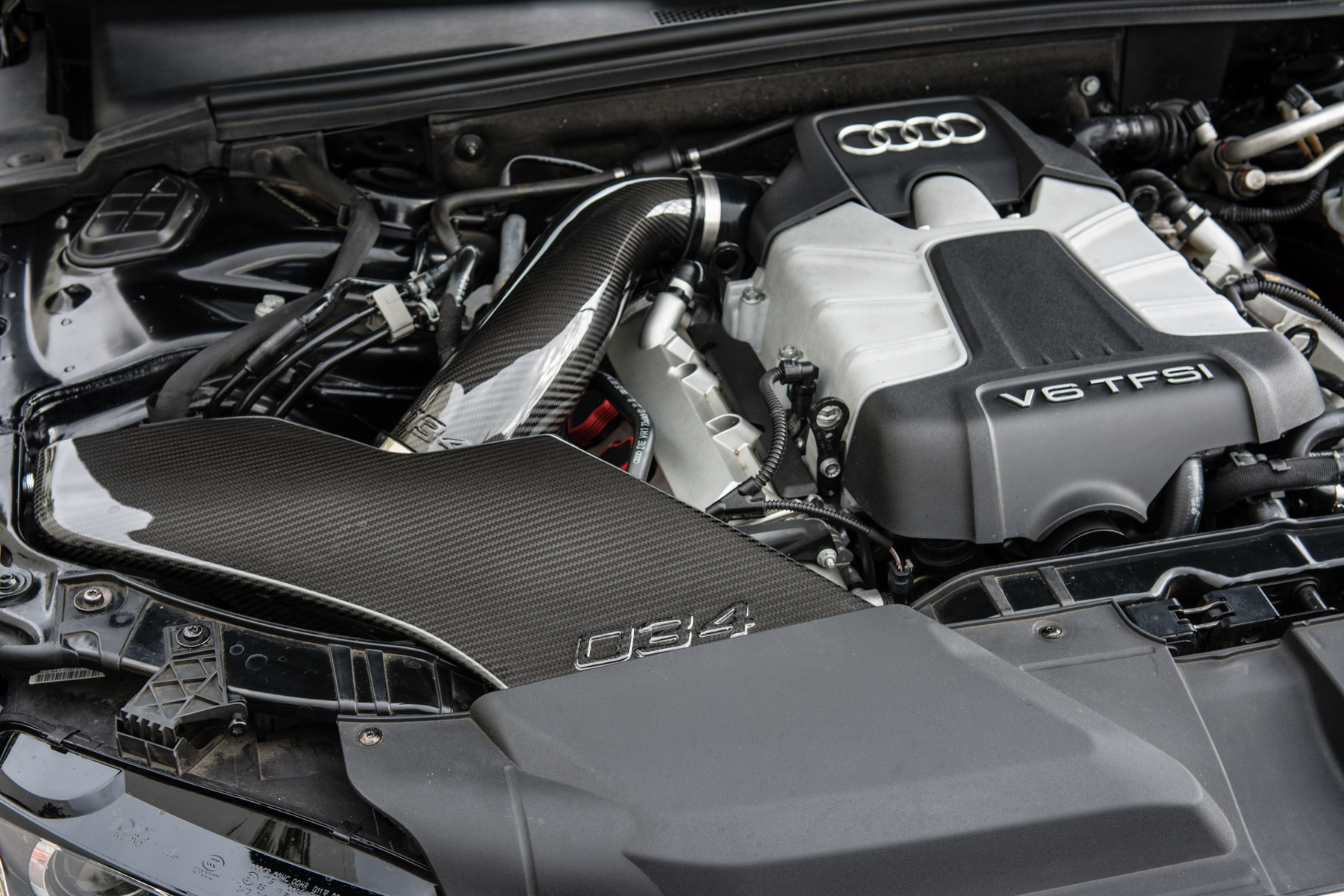 034Motorsport 3.0 TFSI Stage 1 Performance ECU Software was first order of business in pursuit of more power for the S4, as the factory calibrations leave plenty of headroom to safely increase output. The proprietary Stage 1 tune increased boost by controlling the supercharger bypass, while optimizing timing and fueling maps to safely extract an additional 94 horsepower and 69 foot pounds of torque from the 3.0 TFSI engine. Additionally, redline was bumped up to 7,200 RPM for a broader powerband with higher peak horsepower. In order to take full advantage of the power increases and higher redline, the S-Tronic transmission was also reprogrammed with 034Motorsport DL501Performance TCU Software. This performance-engineered software allows for lightning-fast computer-controlled shifts at 7,200 RPM, while also offering user-selectable 4-step launch control for those who desire heart-stopping acceleration off the line.

The factory exhaust system was modified with the addition of 034Motorsport's Res-X Resonator Delete with X-Pipe to give the S4 a more aggressive yet streetable exhaust note to match its newfound power. In this trim, the 034Motorsport B8 Audi S4 became the first Stage 1 tuned 3.0 TFSI car to make an 11-second quarter mile pass in 2015.

Given the impressive gains from Stage 1 and proven reliability of the S4's TVS 1320 supercharger, 034Motorsport added a Supercharger Pulley Upgrade to the mix, allowing the supercharger to spin faster (and move more air) for each revolution of the engine. Paired with 034Motorsport 3.0 TFSI Stage 2 Tuning, the smaller pulley resulted in 10-15 horsepower increases through most of the powerband.

While creating the Stage 2 calibrations, it became apparent that a overdriven crankshaft pulley could be utilized to further increase the drive ratio of the supercharger and feed more air to the 3-liter V6 engine. A 190mm unit was fitted to the 034Motorsport S4 for testing, which highlighted a few more limitations to address before more power could be made. Along with the desired airflow increase came more heat, requiring the development of a larger, more efficient 034Motorsport Heat Exchanger to aid in cooling the charge air. Upgraded Autotech 3.0 TFSI High-Pressure Fuel Pump Internals were installed in the factory HPFP to provide enough fuel to run E85 blends.

Naturally, the addition of these components required more calibration time for the S4 on the dyno, street, and track. 034Motorsport's calibration engineer spent a significant amount of time developing and verifying proprietary software to ensure that Stage 2+ (Dual Pulley) Performance Software delivered consistent, reliable power in any driving condition. Fueled by an ~E40 blend of 91 octane and E85 fuel, Stage 2+ (Dual Pulley) Tuning bumped the S4's power output to over 490 horsepower and 460 foot-pounds of torque! Of course, this is just another stop in 034Motorsport's quest to push the  3.0 TFSI powerplant to new levels, with more upgrades in development at its Fremont, CA Performance Facility.

Power and acceleration weren't the only areas addressed by 034Motorsport engineers on the B8 Audi S4. Already a driver-oriented luxury sports sedan from the factory, the Audi S4 still benefits greatly from chassis, suspension, and drivetrain upgrades designed to improve handling precision and steering response. Starting with the suspension, the 034Motorsport team set out to improve the capabilities of S4 with an assortment of performance-minded bolt-on upgrades.

First on the list of handling upgrades for the S4 was 034Motorsport's X-Brace Subframe Reinforcement, which was designed to improved steering response and handling performance by increasing the torsional rigidity of the front subframe. This popular upgrade addresses the somewhat vague steering feel that many enthusiasts have complained about since the platform's debut in 2010.

Equipped with the optional Sport Differential, the B8 Audi S4 was less prone to understeer than its predecessors, but still benefited drastically from an Adjustable Rear Sway Bar to reduce body roll and facilitate lift-off oversteer for improved vehicle control on track. Along with the sway bar upgrade, Spherical Front & Rear End Links were fitted to increase the effectiveness of both the front and rear bars. Finally, a set of Spherical Front Lower Arms and Rear Subframe Mount Inserts were installed to ensure that suspension geometry remained optimal during hard cornering.

The factory engine mounts were replaced with Motorsport Performance Engine Mounts, and a Complete Drivetrain Mount Insert Package was installed to keep the transmission and rear differential locked down without sacrificing occupant comfort. By reducing unwanted movement, these drivetrain mount upgrades improve response to throttle inputs, create crisper shifts, and offer a more connected driving experience - exactly what you want when you're driving a 490+ horsepower S4.

With plenty of power on tap and a dialed suspension setup, it's important to have proper tires and sufficient stopping power. 034Motorsport installed a set of The Cheapest Wheels on Tire Rack at the Time in 19"x8.5" with Sumitomo HTR ZIII Tires in 255/35/19 - a combination well suited for the street, yet capable of providing plenty of grip for track day outings. Carbotech XP12 Brake Pads and Motul RBF 600 Brake Fluid are used in conjunction with stock calipers and rotors to ensure the S4 can be brought to a halt quickly and consistently. 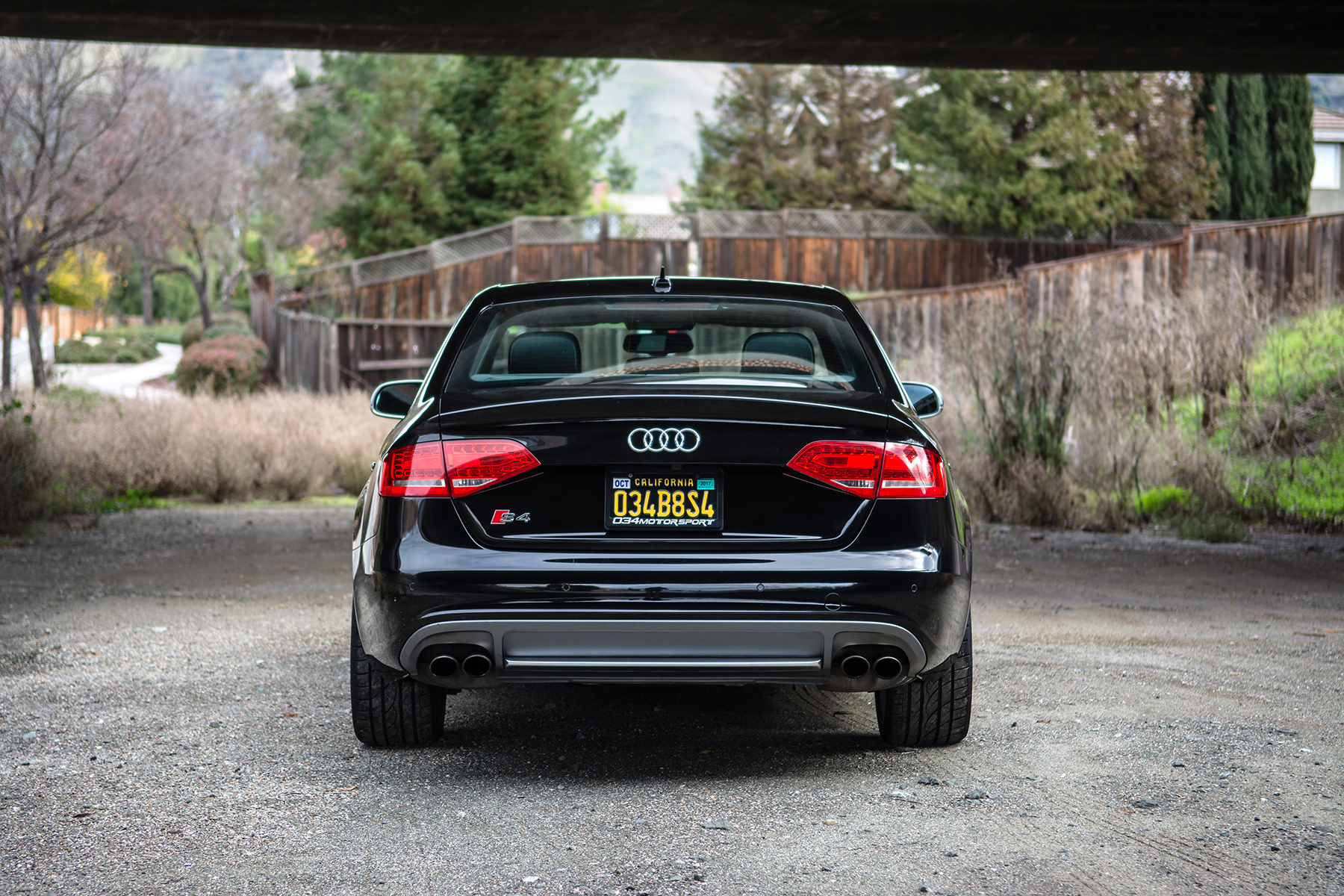 In its current state, RS-car performance lurks beneath the 034Motorsport S4's understated exterior. Every part installed on the S4 serves a clear purpose, and their bolt-on, OEM+ design allows any S4 owner to duplicate its level of performance by installing the same 034Motorsport Hardware & Software Upgrades on their car. Most importantly, every 034Motorsport Hardware & Software Upgrade for the B8/B8.5 Audi S4 was extensively tested in-house to ensure that it offers measurable performance benefits without sacrificing reliability.

Following in the footsteps of every other 034Motorsport Development Vehicle, this particular B8 Audi S4 continues to evolve as new performance upgrades are developed and tested on it. Keep an eye on the 034Motorsport Blog to stay up to date with the latest developments for the B8 Audi S4!