034Motorsport focuses on optimizing every aspect of the intake system across a broad range of variables and compromises. A critical component of a high-flowing performance intake is the ability for air to flow around and into the filter. If the air cannot flow freely around the filter, it will be restricted from getting into it.

Many aftermarket kits fit too large of a filter in an enclosure that cannot accommodate its size, thus choking the filter and reducing its overall flow. This often happens when a product is engineered for one variable at the expense of others. 034Motorsport conducted extensive tests and refined its development of the intake design to allow for maximum airflow surrounding the air filter, allowing for optimal airflow to, and through, the filter. 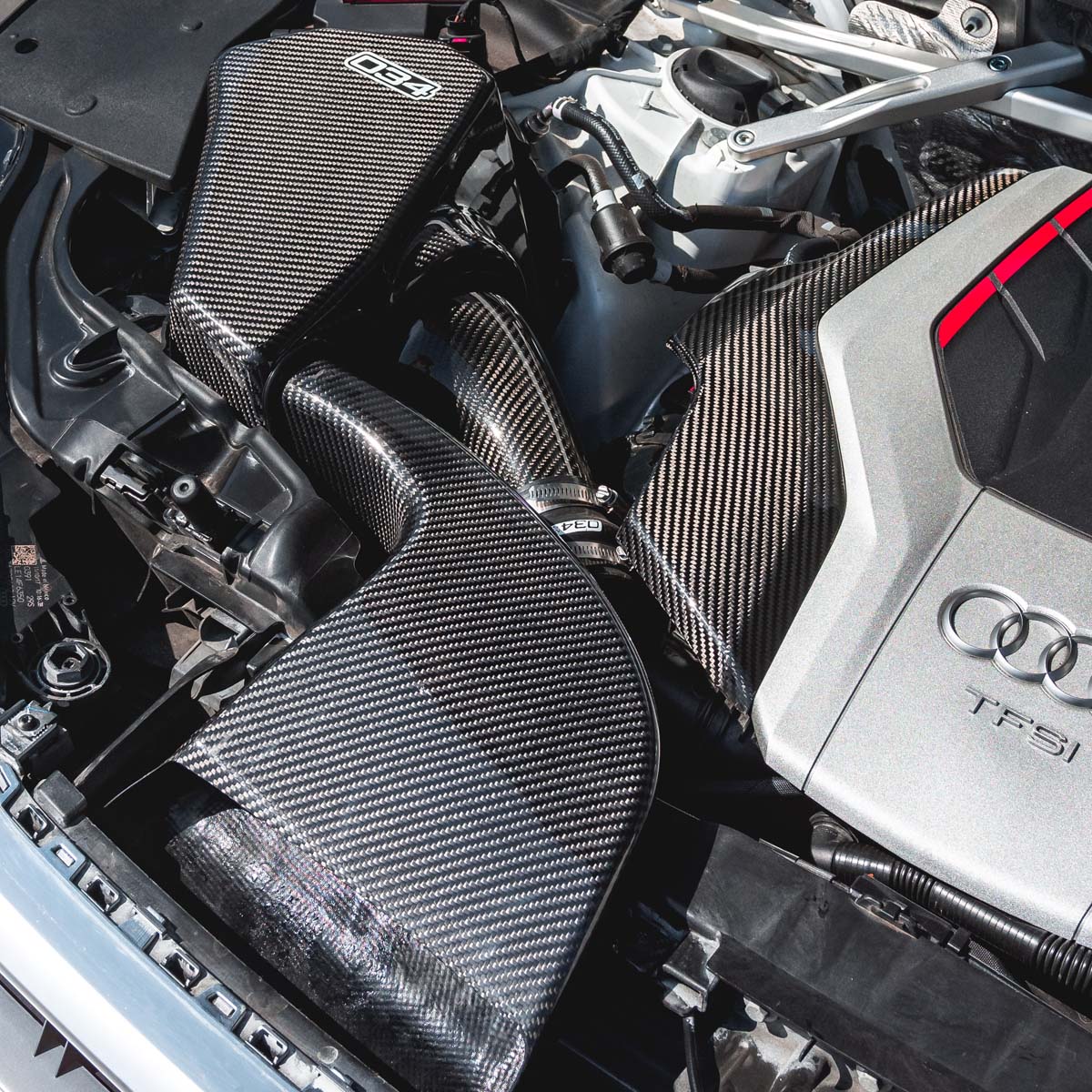 There are several ways to quantify the performance of an engine system's intake, the intake being the air box with filter that allows ambient air to enter the engines induction system that ultimately leads to the intake manifold. Ultimately how easily air flows through the intake filter and air box assembly determines how much the engine is restricted as it ingests air to combust it with fuel, and intake that restricts air flow will restrict the amount of air the engine can take in, which limits the power it can produce. Optimally, an intake should pose no restriction to the engine, so that the engine can ingest as much air as possible to produce the power it has the potential to produce. Typically factory intakes do this well, but as power is increased, the factory intakes pose more restriction and thus limit the power potential of the engine.

At 034Motorsport we express our intake performance in pressure drop, CFM airflow and a Horsepower and TQ test. The most reliable of these 3 are pressure drop and CFM as these can be discreetly quantified for any intake in a very controlled way that allows the comparison of various intake system's performance potentials. The HP test is the most relative as it relies on many other factors that affect the power output of the engine including ECU tuning, exhaust modifications, turbo system modifications etc. Since the intake doesn't produce power itself, it only supports it, the actual power produced is always going to depend on the engine's performance and also if it has a supercharger or turbocharger system involved.

When you see 034Motorsport's accurately tested and advertised flow data, you can be assured that the intake you are considering has a substantively engineered flow increase to support your future power goals and activities.

CFM stands for "cubic feet per minute" of airflow, the higher the number, the higher the horsepower an intake can support, at 034Motorsport we design our intakes to have substantial flow increases over the factory intake, we test all our intakes at 28" of water (how much vacuum is used to suck air through the intake) on a Superflow airflow bench which gives us very accurate and repeatable test results. A stock intake that flows 200CFM may only freely support about 300HP, an intake that flows 400CFM can support roughly twice that power or 600HP.

Pressure Drop is the difference in ambient air pressure and the air pressure measured at the supercharger inlet across the engine's rpm range. The higher the pressure drop at any given rpm, the more restrictive the intake system is, reducing airflow.

The X34 Carbon Fiber Intake System for the B9/B9.5 Audi SQ5 was engineered with performance in mind, and is a free-flowing replacement for the factory airbox and turbocharger inlet hose. As the development of this intake progressed, the X34 Carbon Fiber Intake System yielded measurable reduction in pressure drop at the turbo inlet compared to the factory airbox, with a corresponding increase in horsepower and torque throughout the powerband. 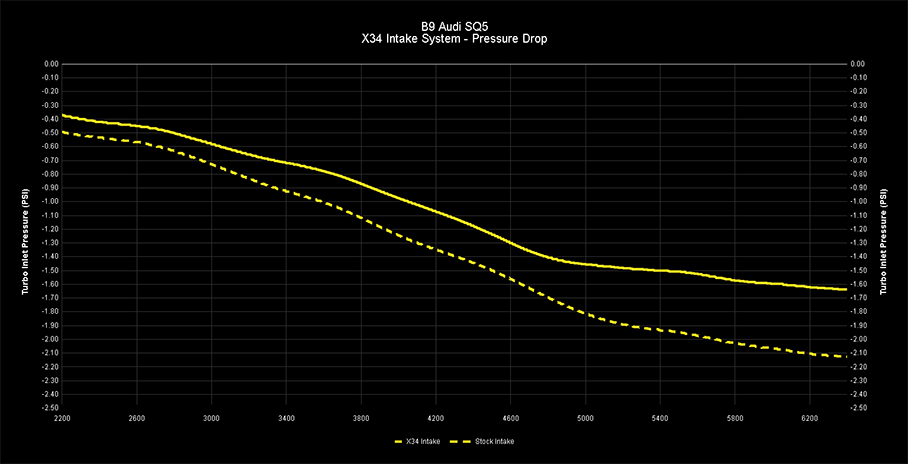 Fitment Guide
Install Guide
More Info
We Also Recommend
We found other products you might like!
Reviews
.
Prop 65

Warning: This product may contain a chemical known to the State of California to cause cancer, birth defects, or other reproductive harm.